Just some banners and avatars that I've done. I didn't create the renders of these banners and some I've used C4d's in so credit for those go to whoever made them. Anyway I'm still working on blending issues but here is what I have. When I start adding more I'll change some of these to links rather than an img tags. Also if you can Name any of the characters that I don't have the actual name of let me know it so i can edit the post

Anyway feel free to comment but if your going to say they're bad either give some advice or tips I can use to improve or I'll probably edit or delete your post.

The T-tar is my fav even tho it's just an avi.

I'd prolly slow and de-sync some of the stars for the Lucky Star banner maybe to give it a less seisure-esque animation.XD Maybe a tween to give them a nice fade in.

The blending needs a little work, but I blame Elements for that really. Yea it's possible in Elements, but it doesn't like to give you any help in doing so. When your trial is and you're forced to go back to elements the glowing blend is probably your best bet.

layer one: Zoom blur @ soft light/screen on the opacity at your taste
layer two: Gaussin Blur 7px @ color dodge on 100%
layer three: Guassin Blur 10px @ screen on 100%
layer four: Normal use a 300 pixel soft brush to lightly erase the outside if there are cracks you have to blend aswell use a 200px for the inside parts
layer five: Normal and adjust the opacity so that the interior looks right while not making the edges complete sharp again or it eliminates the work on layer four. 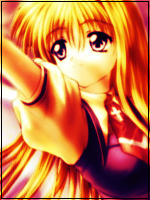 My favorite is the Tsuruya banner

Similar topics
» Rin's Art Gallery
» Gif Gallery (Made by me 8D) Free For Use :D
» High End CPUs - Updated
» is there a way to delete/edit pictures you post in the gallery?
» 360 damage on FLAIL level 30 IMBA! UPDATED